Rabat – The New York Times has deleted from its website a Reuters article dated June 22, 2020, that briefs the report Amnesty International (AI) published the same day, alleging the Moroccan government has used spyware against journalist Omar Radi.  The URL of the deleted article still contains the date of publication and the keywords […] The post New York Times Removal of Amnesty International Article Sparks Debate appeared first on Morocco World News. 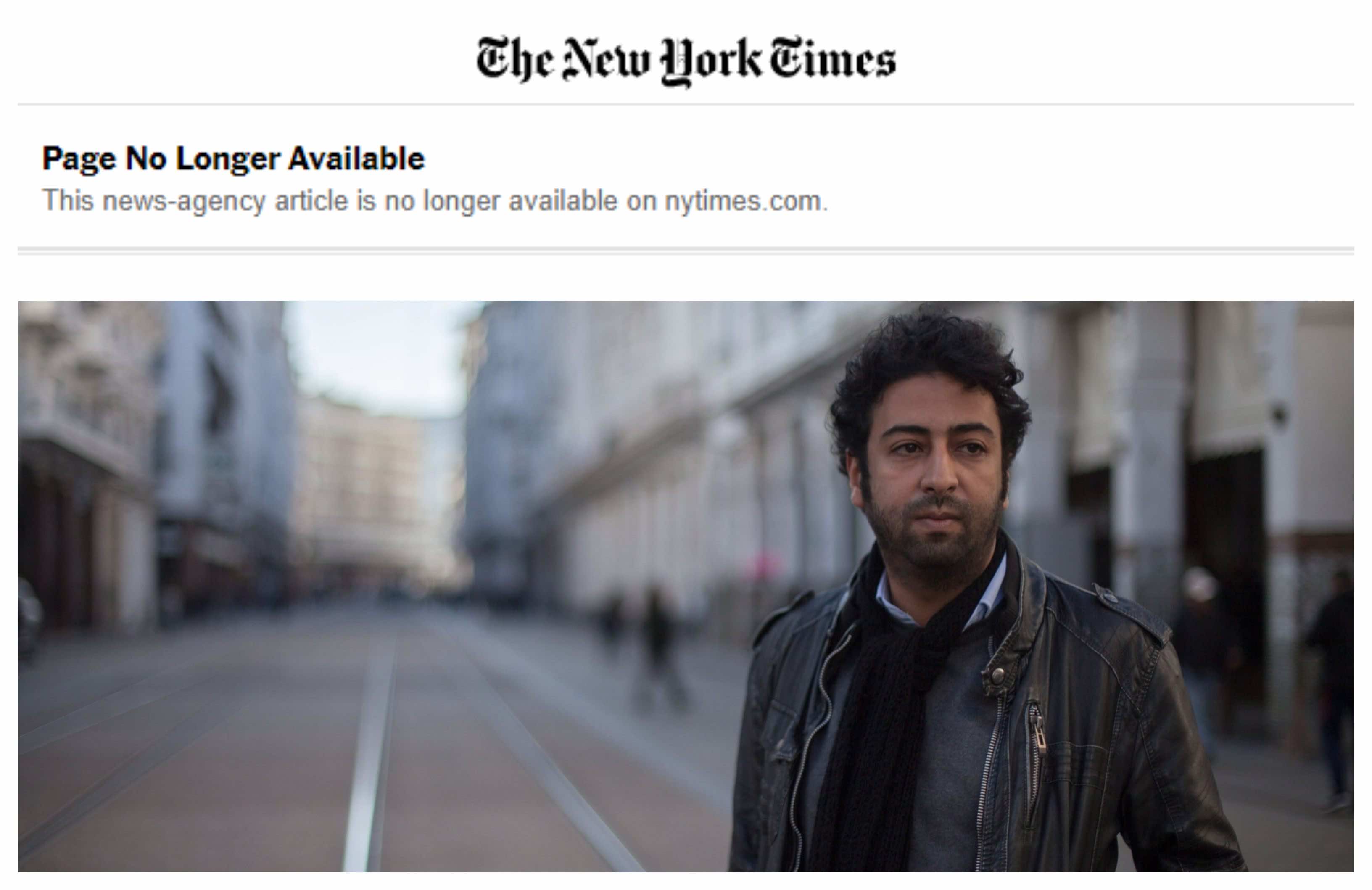 Rabat – The New York Times has deleted from its website a Reuters article dated June 22, 2020, that briefs the report Amnesty International (AI) published the same day, alleging the Moroccan government has used spyware against journalist Omar Radi.  The URL of the deleted article still contains the date of publication and the keywords “reuters,” “cyber, “nso group,” and “morocco.” But the article itself has been wiped clean, leaving only a “Page No Longer Available” message.  The move led some local outlets to suggest the New York Times’ editorial board may have doubts about Amnesty International’s claims, for which AI has failed to provide tangible evidence. Morocco World News investigated this theory. A New York Times standards representative told MWN that such removals are, in fact, standard practice and part of an automated process. In response to our inquiry regarding the AI article and NYT’s editorial standards, he also noted that “in general, New York Times staff members do not write, edit or review these articles.” The report Amnesty International published a report on June 22 in which it alleges that Moroccan security services used Israeli software to spy on Radi. The journalist is known for criticizing human rights violations in the country.  The human rights NGO says its analysis of Radi’s cell phone showed that malware infected the device using a “network injection.” This allegedly occurred while the phone was connected to the internet through an LTE/4G mobile connection on January 27, February 11, and September 13, 2019.  The spyware technology is the same as that described in a leaked document from 2015 linked to Israeli’s NSO Group, the report continues.  Alleging that Morocco has previously used NSO technology against Moroccan human rights activist Matti Monjib, Amnesty International concludes that the government mobilized the “cyber-spying attacks” against Radi using a “sophisticated new technique.” “The attacks occurred over a period when Radi was being repeatedly harassed by the Moroccan authorities, with one attack taking place just days after NSO pledged to stop its products being used in human rights abuses and continued until at least January 2020,” Amnesty said. Omar Radi told Morocco World News on June 23 that he was involved in the making of the report. Because “NSO provides its offers only for government institutions, it is clear that Moroccan authorities are behind this. Morocco is one of the customers of NSO,” he insisted. Morocco’s response Since the report’s publication, the Moroccan government has repeatedly demanded material evidence to prove the spying allegations, and evidence that shows the organization contacted Moroccan officials before publishing the report. Amnesty International has failed to meet these requests.  In a recent interview with Swiss newspaper Tribune de Geneve, Morocco’s Minister of Foreign Affairs Nasser Bourita said Amnesty International failed to be neutral and objective in the June 22 report.  The organization “carried out a real media campaign on the basis of unfounded accusations, hence misleading several media and journalists,” he said. Read also: Blind Trust in Amnesty International, a Blank Check for Waging War Le Desk bites back Omar Radi works with Moroccan news outlet Le Desk, which claimed Thursday that the New York Times regularly deletes articles published through other outlets such as Reuters and the Associated Press.  Le Desk slammed local outlets such as Barlamane and Chouf TV as “proxies” of Moroccan authorities after they published reports on the retracted article. The outlets suggested the American media giant may be unsure of the veracity of the Amnesty International report.   Barlamane also indicated that the New York Times’ move might encourage other big papers to make similar decisions.  Freelance Moroccan journalist Aida Alami responded to these reports on Twitter, calling them “fake news.” “Articles written by Reuters or the Associated Press do not remain on the [New York Times] site [for] more than a limited time. It was not an article written or signed by someone from @nytimes. Just business as usual,” she tweeted.  Les articles écrit par Reuters ou l associated press ne restent pas sur le site plus qu’un temps limité. Ce n’était pas un article écrit ou signé par qqn du @nytimes. Just business as usual — Aida Alami (@AidaAlami) July 15, 2020  “You are a propagator of fake news,” she wrote in a separate tweet targeting Barlamane.  Barlamane vous êtes des menteurs et des propagateurs de fake news. Voir mon tweet ci dessous https://t.co/aDx8yDOx1i https://t.co/EGKu3xcPQb — Aida Alami (@AidaAlami) July 15, 2020 Le Desk used the same language against the media outlets reporting on the deleted article and based its claims on Aida’s tweets. The New York Times’ removal of articles is a “common practice,” the outlet stressed. Examining the New York Times article removal process Morocco World News contacted the New York Times for comment on the reason for the article’s removal. Will Dudding of NYT’s Standards and Corrections Department explained that AP- and Reuters-sourced articles “hosted on our website are placed there and removed via an automated service.”  He also noted that “in general, New York Times staff members do not write, edit or review these articles.” A quick search of the New York Times archives will yield scores of undeleted reports by Reuters and the Associated Press dating back several years. The outlet also has individual sections on its website dedicated to recent top news articles from Reuters and the Associated Press.  According to Dudding, only agency-sourced articles that appear in NYT’s print newspaper remain on their website long-term “as part of our record.” He added that “you can tell if an article appeared in print at the bottom of the page.” A review of the New York Times archives supports this assertion.  However, NYT’s article sourcing procedures do not discount allegations from several sources of Amnesty International’s bias against Morocco.  Read also: Official Outlines Paradox in Amnesty International’s Hostility to Morocco The post New York Times Removal of Amnesty International Article Sparks Debate appeared first on Morocco World News.
Read More

UNHRC: Algeria is Responsible for Abduction of Polisario...

Coronavirus Recession Takes Hold of US, France, and Spain

Thousands of Moroccan Women Trapped in Spain Plead for...

Rabat – A man in his seventies died yesterday, October 21, after a tram in Casablanca...

UK Liberal Democrats Plan to Fast Alongside Muslims During...

Prominent Liberal Democrats are joining Muslims during Ramadan and will fast with...

Rabat – The monitoring unit at the Moroccan embassy in Paris is mobilizing all of...

Rabat – Cadi Ayyad University in Marrakech is the top academic institution in Morocco...

Climate Apartheid Is Upon Us